Phu Quoc is an island off the southern tip of Vietnam and just east of Cambodia. In fact, in the past Vietnam and Cambodia have been at loggerheads as to who actually owns it. We’d booked in to the Mango Bay Resort on the west of the island as a treat for my birthday and I was so excited to get there.

Our coach from Can Tho took us to Rach Gia port where we collected our pre-booked ferry tickets to the island. Unfortunately, my big rucksack had seemingly shared its journey with some leaky meat/fish and was now soaked in a rank smelling liquid which made me gag and, seeing as I had no choice but to carry it, I was now sporting the same scent. Tired and p**sed off, we sat and waited for our ferry, grabbing crisps and coke for lunch from a small shop.

Our ferry pulled into port and there was no organisation to the whole process. Hundreds of people were trying to disembark, including people riding scooters, only to hit a wall of hundreds more people trying to board. A few queueing barriers wouldn’t have gone amiss, but queueing isn’t really a thing here. The only sense of control was that the taxi drivers were made to stand behind a line where they shouted at potential customers and then practically ran people over to get through the crowds. We stood back and watched the chaos, choosing to board once it had calmed down.

We dropped our big bags near the emergency exit doors as instructed (super safe), took our seats and the ferry set off, jetting across the waves at a staggering speed. As per usual, the Vietnamese passengers closed the curtains so we couldn’t see much and I decided to have a nap.

Arriving at Phu Quoc pier after 2 and a half hours, we were collected by our hotel and driven to the gorgeous Mango Bay Resort. Already we were giggling at how luxurious our transfer was – a minivan with automatic doors and free bottled water. Arriving at the resort, our bags were carried in (apologies to the guy who ended up with mine) and we were taken through to their sea view restaurant where we had complimentary fruit sorbet and a delicious lemon drink.

Our room – a log cabin set back from the beach within lush woodland with a large bedroom complete with four poster bed, outdoor bathroom and a terrace with loungers – was amazing. The place was incredible! Run in an eco-friendly way, the cabin was completely open air at the top, allowing sea breezes to blow through and cool the air naturally without the need for aircon (although it would have benefitted from it). This did however also mean that it was open to all manner of wildlife.

We went down to the bar for a few beers during happy hour (25% off) and then returned to our room to freshen up. Hooooooly cow, their products smelt increeeedible. To begin with we weren’t sure if the scent of the shower gel and shampoo was next-level, or if we just generally stank, but I hope it was the former.

Deciding we didn’t want to leave our little haven, we had dinner at the hotel restaurant but opted for their cheaper Vietnamese cuisine (though still not cheap enough for our budget). I had chicken noodles and Tom had pork noodles and we were brought complimentary bread and butter which, to be honest, was the highlight. Feeling naughty, we also ordered a chocolate brownie and scoffed that down. Returning to our cabin, the room had been prepared for night time with ambient lighting, mosquito nets drawn down and mosquito coils lit.

That night, we were kept up by the relentless noise of fruit bats dropping the stones from whatever fruit they were eating onto our bathroom floor (it took us a few days to figure out this is what it was).

The next morning, I woke up as a 27 year old and Tom presented me with a few birthday cards and gifts. Along with the bag he’d bought me in Ho Chi Minh I also had cards from my uncle and my London girls which were lovely to read. Another highlight was receiving a video message from my aunty of my gorgeous little Nanny and also one from my parents. I’m not one to really get homesick that often but it’s amazing how a 10 second video of your family can change all that. Holding back a couple of tears I got ready and went down to the restaurant for probably the best breakfast of my life.

Seated in a prime spot overlooking the sea, our server brought over the breakfast menu along with a bowl of seasonal fruits including watermelon, dragon fruit, mango, passion fruit, banana and lychee. We both ordered the full English but also helped ourselves to cereal, fresh fruit juices, bread and muffins from the buffet. What better way to start your birthday? 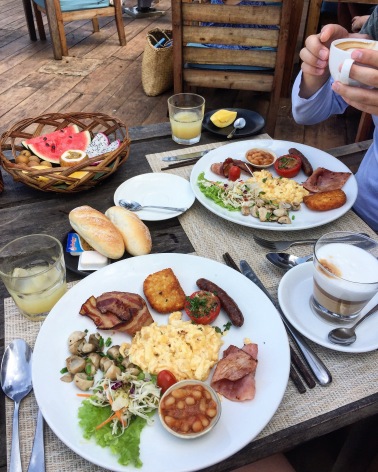 After our food comas had subsided somewhat, we borrowed bicycles from the on-site activity centre and explored the surrounding area. Despite the factor 50 I was wearing, I managed to burn my face, chest and arms again. Great.

Back at the resort we passed a hotel worker carrying a snake at arm’s length that he’d just removed from one of the cabins (note to self – check cabin for snakes). We then chilled on the beach (in the shade) and went for a swim in the clear waters.

In the afternoon we booked in for an hour long full body massage each at the spa, of which this was Tom’s first experience and thankfully he enjoyed it. Due to my newly burnt skin it wasn’t the most comfortable of massages I’ve had, and it was slightly awkward that my legs were peeling from my previous burn (apologies to the masseuse).

In the evening we had our first G&Ts in a long time at the bar – so so nice to drink something other than beer! For dinner we splashed out… we shared an incredible mozzarella and parma ham salad to start, I had steak, Tom had lamb chops and we had wine for the first time in 2 months. Once well and truly stuffed, the servers brought out an apple tart with a candle and sang ‘Happy Birthday’ to me. Very cute. We finished our wine looking out to sea and then, being the old/sensible 27 year old that I now was, we worked out our finances until bedtime.

That night we shared our room with a rather noisy lizard that was taking shelter from the downpour of rain and the fruit bats returned with a vengeance.

The next day we had another amazing breakfast – this time I had poached eggs and a mango salad – and then the rain well and truly poured. We took the opportunity to run some errands and during the limited break in the rain we were able to relax on the beach.

Later in the afternoon we participated in a free yoga class in a cabin overlooking the sea – another first for Tom. The class was quite fast paced and Tom did well to keep up, if a little wobbly. Surprisingly he said he liked it and would be up for doing it again – perhaps a new hobby for back home? Probably not. At the end of the session we enjoyed some relaxation time, listening to the sound of the nearby waves and the instructor gave everyone a head massage. To be honest, I did nod off a little bit so it must have worked.

Deciding we definitely couldn’t afford another dinner in the hotel restaurant after assessing our finances, we walked into town that evening and dined at a small Vietnamese place frequented by numerous Russian families and had a delicious meal of beef with ginger and lemongrass, rice and a beer. £3.75 is more like it. 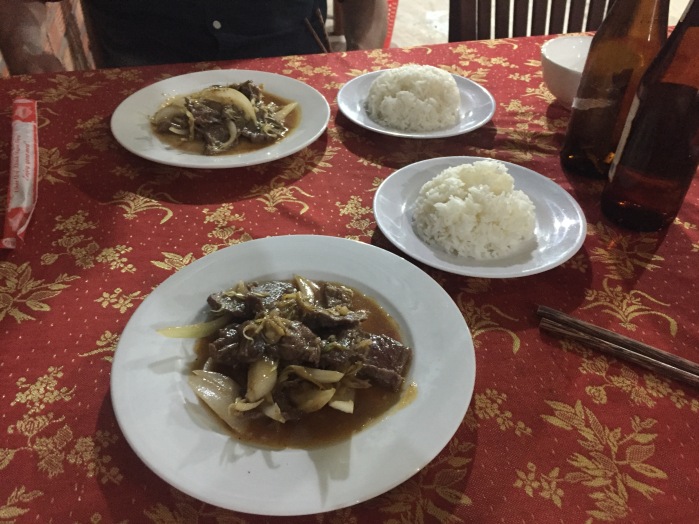 Our third morning in paradise was spent going for a swim before another incredible breakfast – a charcuterie and cheese platter and iced coffee for me. The rain was back again and halted our time at the beach, so I spent 5 hours catching up on my journal which I’d majorly slacked off on. We ate our evening meal at the same local restaurant again and then planned the next leg of our journey. 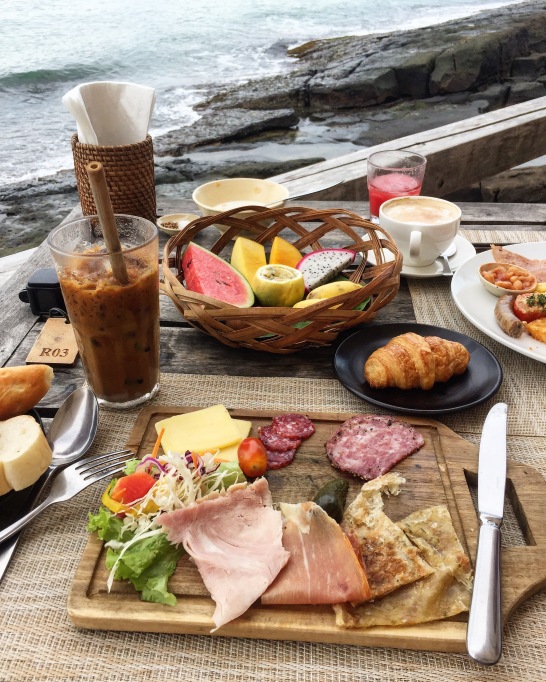 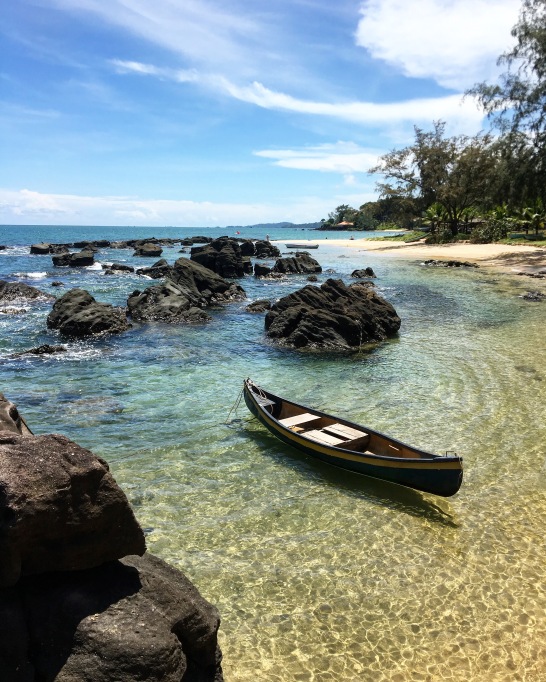 We enjoyed our final breakfast (the full English to finish) and then packed our things, settled our bill (let’s not dwell on that) and killed time until our transfer down at the beach. Tom borrowed some snorkelling equipment and filmed lots of different tropical fish around the shallows and again, I managed to burn. Unbelievable. It was then time to sadly wave goodbye to Mango Bay Resort. Such a fantastic and special place. I’d love to visit again for a holiday.

The Phu Quoc Express ferry took us back to the mainland and we spent the night in Ha Tien, a small town near the border to Cambodia, at a very basic hotel – what a step down. We dined at an English restaurant and chatted with an Australian ex-pat who lived in Phu Quoc who had some amazing stories and then had an early night in preparation for an early start.