Jeeps collected us from our hotel in Jaipur in the morning and we started the 5 hour journey to the small farming village of Tordi Sagar.

The journey was a little uncomfortable riding sideways on a bench and with no air conditioning… you have to be prepared to completely sweat out into your clothes in India in May, but at least we were all in the same boat. We stopped half way at a roadside cafe but I refrained from using the toilets after some of the boys’ reactions. The one benefit of the heat in India is that you sweat so much you rarely need to use the toilet, and in most cases whilst travelling, that’s the preferred option.

Our hotel in Tordi was (believe it or not) a section of the royal palace. The royal family of the area had divided the palace into several sections and shared them out amongst the family. One brother chose to convert his section into a hotel and we were lucky enough to spend a night there. Arriving at the hotel, we were welcomed with a small red bindi dot on our foreheads and a cold drink. We made our way to our room and were not disappointed – the door was an ancient slab of carved wood with a giant padlock, leading into a lofty room with multiple stained glass windows. The bed was equivalent to two doubles and was made from dark carved wood, and a tiny blue door led through into a large bathroom. It’s worth noting it would probably be a 2 star establishment in the UK, but here it was the most luxurious place we’d stayed so far. 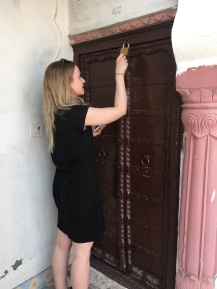 As Tordi is such a remote village, all meals were included in our stay, so we enjoyed a lunch of lentils (daal) and large sort of dough balls.

Once the temperature dropped slightly, our guide took us out for a walk around the village. It was refreshing to not be hassled by men or be chased by tuk-tuk drivers trying to pick you up; instead local children ran out of their houses to come and say hello, asking for ‘one photo please’ and wanting to see their picture on your phone/camera. A group of young boys were playing cricket in the street and one member of our group bowled a few balls for them, much to their amusement. We were shown how the villagers collected fresh cow dung to make ‘patties’ to burn as fuel and also for fertiliser. Nothing seemed to be wasted here.

We then bundled into our jeeps once again to head for the sand dunes to watch the sunset. On the way we stopped by another village where locals were pumping water from the ground, and the children were all very excited to see us, welcoming us into their homes and handing us baby goats to hold. It was fascinating to see a different way of life in India and made me feel so grateful for what we have in the UK – though perhaps their children had a more enjoyable childhood playing safely in the streets and without the draw of games consoles and mobile phones. 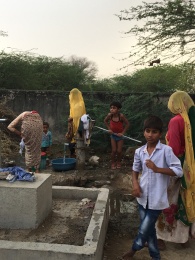 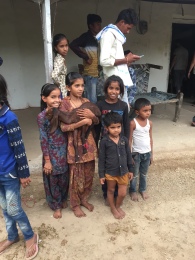 That night we dined on a terrace at the palace, with views out across the village and farmland. The meal was really nice – more daal, roti and cabbage. Two young local girls came across to do henna tattoos for us so I opted for designs on both of my hands and lower forearms. We sat out drinking beer until around 1am and then I washed my henna off to reveal the finished design. 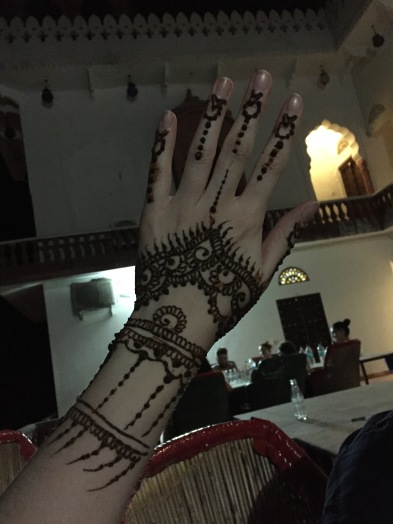 In the morning we left Tordi by jeep for the spiritual town of Pushkar. The journey took around 5 hours again and thankfully we had some good conversation in our jeep to distract us from the heat and the need to pee.

Pushkar is a dry and vegetarian town – no alcohol or meat is allowed and if you’re found with either you can be arrested. The town is one of the only ones in India to worship the Hindu god of creation, Brahma, and people flock there on pilgrimages to bathe in its holy waters.

We were lucky to have a pool at our hotel in Pushkar so upon arrival we took a dip to cool off, had some lunch and then headed out on a walk around the town. The vibe here was much more chilled out than previous towns we’d visited, and although the market stall holders tried to attract you into their shops, they weren’t as persistent as we’d previously experienced. We dined down by the lake and I opted for an aubergine gratin with a garlic naan – happy to have a break from curry and I didn’t feel too guilty as others followed suit!

The next morning we were up at 4am to prepare for a hike to a temple to watch the sunrise, but with delhi belly still doing its thing both Tom and I thought it best for me to stay back and rest. I didn’t want to fully miss out though, so set my alarm for 6 and watched the sunrise from our balcony. Tom returned around 8ish and showed me photos of the monkeys they’d seen and men riding on top of cable car carriages. Goodness knows why they didn’t get in the carriages, but it provided another example of India’s top health and safety standards. We spent the rest of the day down by the pool – I of course got a little burnt, mainly on my legs, but Tom came off worse as he played his usual game of ‘I don’t need sun cream’. Later that evening we headed to the markets and I bought a couple pairs of trousers and then we dined at a really cool pizza restaurant tucked away down a side street, no pepperoni though *sad face*. 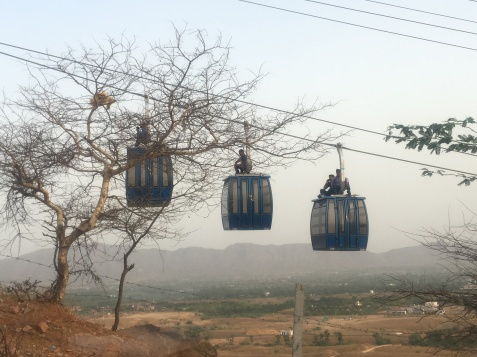 One thought on “Tordi & Pushkar – India”