It had gone down like the proverbial lead balloon when we found out our 5 hour train from Pushkar to the ‘city of lakes’, Udaipur, would be in standard class without any air conditioning. Thankfully our guide clocked the reactions and upgraded the group to a better class with AC, and the relief of climbing into a nicely chilled carriage after sitting on the platform for an hour due to delays was worth good money.

Tom and I plugged ourselves in and watched The Greatest Showman on my iPhone which I’d downloaded to boost my mood on long journeys such as this one… and much to Tom’s relief I managed to refrain from singing along.

Meanwhile, a group of around 20 Indian men were all stood around their seats, talking and laughing loudly right next to us on what I imagined was a stag do which, when like me your main activity for long journeys is sleep, wasn’t ideal. Throwing some serious side eye and muttering under my breath I put my headphones in, covered myself up with my hoodie and managed to catch a few Zs.

We made it to our hotel in Udaipur in time to tune in to the Royal Wedding and it was so strange watching the UK on TV and feeling little pangs of home sickness brought on by the sound of Huw Edward’s voice. I sat and watched the ceremony with a fixed grin on my face, thinking of my family and friends watching it back home, and imagining the morning chat I’d be missing in the office the following Monday. Meeting back up with the rest of the group it was clear that everyone had been doing the same thing and we analysed the event whilst walking to the centre of the town.

Our guide took us on a walk to familiarise ourselves with the area which was handy as we’d be spending three days here. Dodging mopeds and cows we wound our way through side streets to the main lake of Udaipur – lake Pichola, and took a boat ride to take in the views of the City Palace, a range of 5 star hotels and the magnificent sunset. As we set off across the lakes, hundreds of birds swooped around us, dipping into the waters below… then we realised the shape of their wings was slightly odd and that they were in fact huge fruit bats. As the sun set, the whole lake and surrounding off-white buildings glowed orange and I felt a million miles away from the hustle and bustle of the city streets. 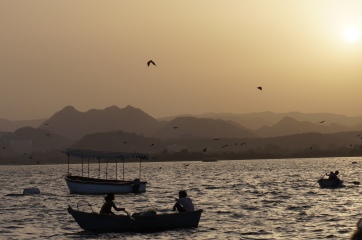 Returning to shore, we headed to a courtyard restaurant and I decided it was time to break my vegetarianism and give meat a go with a chicken tikka masala. The curry was delicious and I probably ate more than I had done in days, enjoying a nice cold bottle of Kingfisher too. Our guide asked if anyone wanted to head to the rooftop of our hotel and have drinks… a resounding yes… and informed us that shops stop selling alcohol after 8pm but he knew a place to get some. 30 minutes later we headed to the rooftop and he’d got us 4 litres of gin, 2 litres of rum, a litre of vodka and a litre of whiskey – each £4 per bottle. We definitely didn’t finish it all but a good effort was made.

I had a rough night with my never ending case of delhi belly – potentially not helped by eating the chicken – and it continued to get worse throughout the next morning, so much so that I decided to contact a doctor. Using the Push Doctor app via my travel insurance, I made an appointment to have a video call with a doctor in England, only to spend an hour battling with the system as the WiFi in the entire hotel seemingly wasn’t strong enough to connect. Accepting failure, I just had some rehydration salts and rested up. Feeling bad that Tom had opted to stay with me, I decided to brave the outdoors and we headed to the City Palace in the afternoon for an explore. The palace was huge and it was fascinating to learn about the royal family and the grandeur of the palace environment in previous times. 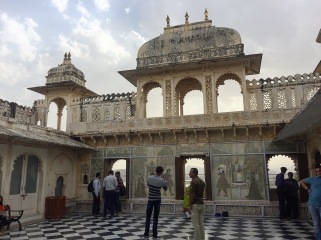 In the evening, our guide took us to a gorgeous restaurant overlooking the river which was so off the beaten track you’d never have known it was there. It was clearly a little more upmarket than any of the other places we’d been to and we felt a little under-dressed compared to the Indian ladies in their beautiful saris. I decided to play it safe and ordered a mushroom bolognese and I wasn’t disappointed, it was baked in a pot and was absolutely delicious.

As an optional activity for the following day, Tom had decided to take part in a cookery class at a local lady’s house, but the idea of standing in a small kitchen for four hours in the heat put me off. Instead I arranged to meet with some others from the tour to hike to the Monsoon Palace at 8am, though after another night of feeling ill I hung back and had a movie day by myself. Thankfully the bed in this hotel was so comfy I didn’t feel guilty for having some R&R. Tom returned from his cookery class honking of curry spices, including my rucksack which he’d borrowed… not pleased. He proudly showed me photos of the items he’d made and his lists of ingredients so we could make them when we returned home.

In the evening Tom and I decided to hike to the so called ‘Rat Palace’ which we’d read was teaming with sacred rats and you apparently couldn’t see your feet there were that many.  We decided against the cable car and climbed to the top of a steep hill, taking in the spectacular views of the city and, imagining an Indiana Jones movie, we removed our shoes as is customary and headed in to the palace. To our relief, the only rats we saw were locked securely away in cages, and we scooted round before descending back to the town to join some of our friends for dinner.

Udaipur has probably been one of my favourite places in India so far; beautiful scenery with undulating hills and calm, quiet lakes, mixed with the contrasting busy streets and vibrant, noisy surroundings of India.