The Phi Phi Islands are an island group in Thailand set within the Krabi province made famous as the location for the 2000 Leonardo DiCaprio film The Beach. Ko Phi Phi Don is the largest and most populous island of the group and would be our next destination.

We checked out of our hotel in Phuket and boarded our minibus transfer to the port. The driver didn’t speak English so when we arrived at the port we were ushered out of the van with no further instruction. Carrying only a paper receipt and a sticker we’d been given, we enquired at an information desk and were pointed in the direction of a cattle market-esque horde of people at one end of the building. Joining the cattle, we were pushed around as people attempted to shove through using rucksacks and suitcases as weapons. Finally making our way through a set of barriers, we boarded a large ferry in the rain, adding our main bags to an enormous stack of luggage at the back of the boat, hoping it would a) make the crossing and b) stay dry. The boat was already very full so we reluctantly took seats on the lower deck in the bowels of the vessel along with around 300 other passengers.

The journey was pretty horrendous; huge waves overlapped the windows plunging the hull into darkness and as the motion sickness set in people reached for the plastic sick bags provided, resulting in an orchestra of vomiting. Some people opted to brave the top deck, either to throw up over the side or to just get some air, and when they returned they were soaked through due to the rain and spray. We both felt dreadful but managed to subdue our nausea with sea sickness bands and by distracting ourselves with music.

Relieved to reach land, albeit not dry, I retrieved my bag from the stack, put on my rain poncho and set off for our hotel which was a 15 minute walk away. We weaved our way down pedestrianised streets lined with shops, bars, cafes and restaurants and arrived at the Chunut House Resort. A ladyboy checked us in and we were escorted to our room on the second floor of a modern building looking out over jungled hills below. Hostel choices were somewhat limited for Phi Phi so we’d ended up spending a little more than we normally would, but we had a huge double room, a balcony and good breakfasts. 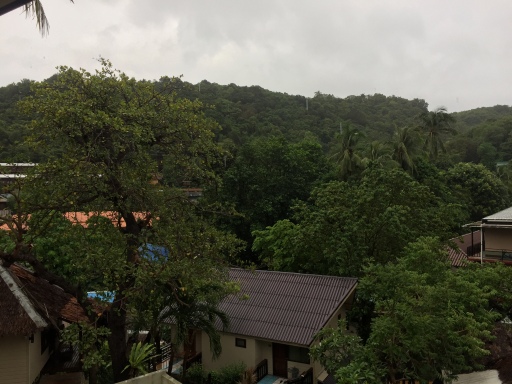 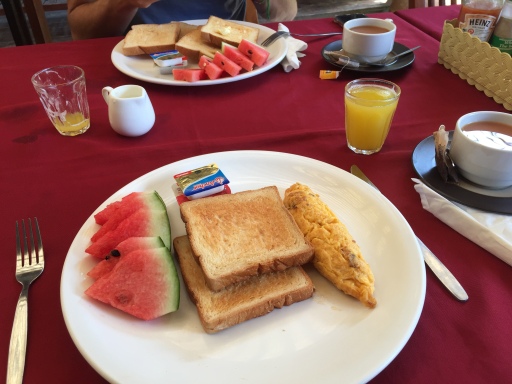 Once settled in, we explored the main area of the island and browsed various western restaurants, opting for a rather dodgy tasting pizza. Afterwards we walked down to the beach with its various neon-lit bars, each blasting out music and entertaining visitors with local fire performers. They were so impressive, twirling flaming batons with immense strength and accuracy. We stood and watched for a while, turning down free shots for a go at their limbo game, then went to a bar on the main streets for a pint.

Next door was a Muay Thai boxing bar with daily fights from 9pm which were free to watch as long as you bought a drink first, so we got ourselves seats and waited for the bell. Two relatively unfit looking guys entered the ring and the crowd quickly grew. What we thought would be a tame fight turned into an exhilarating battle with roundhouse kicks to the head and a number of knock-out blows. That was the only professional fight of the evening as the bar then invite the audience to have a go in return for a bucket of cocktail. People slowly began to volunteer and, wondering whether their insurance policies covered boxing matches, we watched as four sets of girls and one set of guys took to the ring. The fights were hilarious with techniques ranging from limp body slaps and running away or twirling to dodge punches, all the way through to light-footed strong-jabbing pit bulls who definitely wanted to win.

We’d only planned to stay in Phi Phi for one night after reading a range of reviews slating the area, but waking up to our first blue skies in weeks we decided not to waste a day travelling and extended our stay so we could enjoy the sun.

We had omelettes at our hotel then set off on an uphill trek to visit the island viewpoints of which there were 3. Sweating buckets in the heat, we made our way along dirt tracks until, just before the first viewpoint, Tom slipped in his flip flop and fired mud all up his cream coloured shorts and t-shirt. Not the end of the world, except it looked remarkably like he’d shit himself with great force. Thankfully he’d packed his swimming shorts and it was a quiet area so I encouraged him to whip everything off and change, taking shelter behind a car. Seconds after he’d pulled up his shorts groups of people arrived from all directions, missing a feast for their eyes by only a moment. Counting our blessings and laughing uncontrollably, Tom packed his muddy items and we continued to purchase our ticket to the first viewpoint for 70p.

Passing a monkey playing with a kitten we climbed some steps and took in the view of two bays with aquamarine water separated by a narrow spit of white sand and jungle covered hills below. The view was beautiful and we sat for a while taking it all in. Ko Phi Phi was one of the islands hit by the Boxing Day tsunami in 2004, destroying nearly all of its infrastructure, and there was a poster which showed what the island looked like prior to and following the destruction. It must have been horrifying. 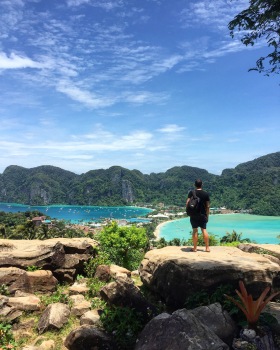 Sweating in the midday heat, we took shelter at one of the cafés at the top and had a soft drink each on the terrace. Tom had to excuse himself for a while… still suffering with a dodgy tum, so we took our time and moved on to the next viewpoint when he felt ready. Within minutes of setting off he needed to go again and was legitimately looking for a spot in the trees, but after reminding him what happened when he got changed, he was a little more reluctant. Crossing his legs, we walked faster and reached the top viewpoint quickly. He joked about using a toilet in a shack we passed next to a house but the joke was on him when that turned out to be the public toilet. I’m not sure who to feel more embarrassed for… the old man sat outside the shack fixing his motorbike who had a front row seat for Tom’s performance, or Tom for having to share the experience with an audience. Upon his return, he exclaimed that he’d be surprised if he could ever pee that much liquid. Oh dear.

We chilled for a while, making sure Tom had plenty of water, then slowly made our way down to the final viewpoint before returning to our hotel for a rest. Once Tom was feeling a little better we headed out again in search of Ko Phi Phi’s Long Beach. The route took us along a snaking coastal path with some steep climbs and after half an hour we arrived to a stunning white sand beach with barely any people. We hung our belongings in a tree and entered the gorgeously clear and warm water. We swam and floated around for a while and were surprised to see so much dead coral covering the sea bed – sad to see the damage caused by tourism and pollution. Before the sun set we made our way back along the coastal path back to our hotel. We had a very chilled evening and had a simple beef noodle dinner at one of the restaurants in the centre. 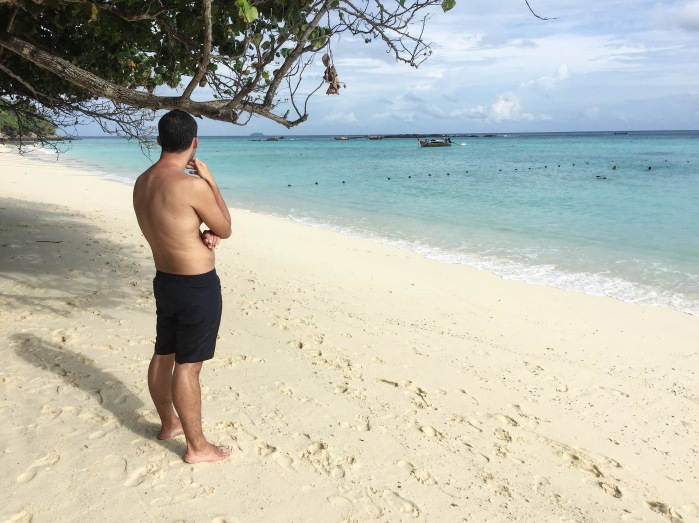 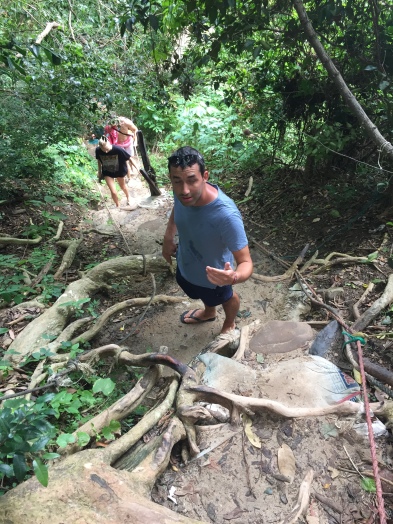 The next morning we enjoyed another breakfast and then went off to the main touristy beach. We’d been in two minds whether to do a boat trip to visit Maya Bay (where The Beach was filmed) but neither of us were too keen on the other points of interest on the itineraries, nor the expensive price, so instead we rented a double kayak for 2 hours for £7.

The sea was pretty choppy and as we left the shelter of the bay the wind made it almost impossible to move forward. At the front of the kayak I was getting barraged by waves and we were shouting at each other to try to retain control and not be tipped over. Eventually we managed to get round the headland and did a big loop to swing into the next bay to avoid being rolled over. We were exhausted by the time we made it ashore and joined about 15 people who had made the same journey.

The beach was small and beautiful, with towering limestone karsts and jungle either side. We swam in the sea for a while and rested on the beach before deciding it was time to make the return journey. We were still battered by waves and it was pretty scary, but at least this time we weren’t paddling against them and we made it back to the main beach in about 30 minutes.

Back on dry land we grabbed ham and cheese toasties and crisps to refuel and chilled in our room before dinner. We headed to a Turkish restaurant where we had delicious food (a lamb wrap for me) and, though a little pricey, it was definitely worth it for our last night on Phi Phi. We bought some beers from a shop and watched the fire show at Slinkys Bar from the beach before returning home. 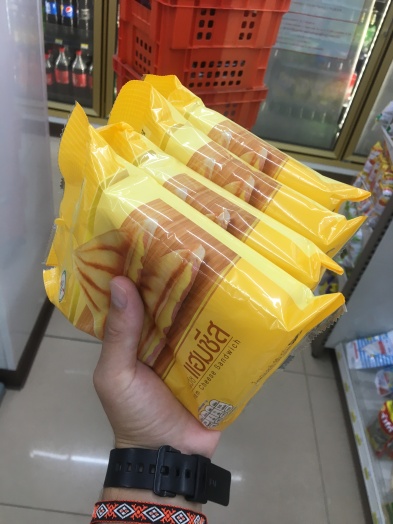 I’d expected Ko Phi Phi to be a heaving, disgusting, trashy island full of 17 year olds and, yes, to an extent it was busy with people wanting to have fun and let loose, but it really wasn’t that bad at all. We weren’t there in the high season however so I’m sure we saw the quieter side of things, but I enjoyed our time there. 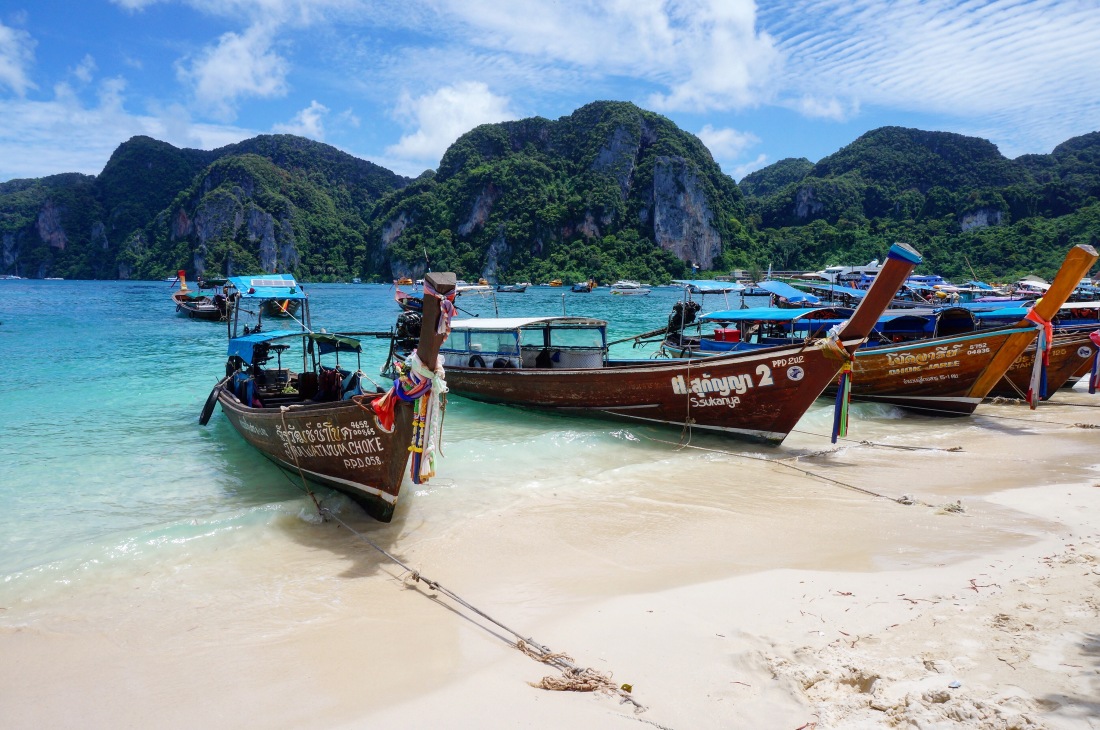