Ko Lanta (or Ko Lanta Yai) is the largest of 52 islands which make up the Mu Ko Lanta National Park, part of the Krabi Province in Thailand. It has several long sandy beaches running down its west coast, as well as mangrove forests, tropical jungle and coral reefs popular for diving trips.

Deciding we’d done all we wanted to on Ko Phi Phi, we booked a ferry boat to nearby Ko Lanta via our hotel for £8 each. On the morning of our check out we were told that instead of the 11am ferry we had booked, we’d actually be on the 3pm one, so as we’d been mis-informed we negotiated with the receptionist to let us keep our room until 1pm. With not much to do we just hung around until it was time to walk to the port and we shared a cheeky McDonalds chicken burger and got ice cream cones to take on the boat with us. We boarded super early in order to get seats on the top deck (lesson learnt from our last sea crossing) and set off for Ko Lanta.

After a little snooze during which Tom took the most horrific photos of me (he’s started an album dedicated to ‘Sleepy Soph’) I looked at the map on my phone and realised we were heading in the opposite direction of Ko Lanta and were instead going straight towards Krabi on the mainland. Tom went over to the onboard snack shop to explain our situation and a female passenger sat next to the shop started laughing out hysterically. She asked if he was Thomas Holliday and said we needed to follow her when we landed in Krabi. I still have no idea who she was – she didn’t seem to work for the boat company so maybe she was a tour agent or something – but true to her word, we followed her out and she spoke to a minibus driver who would drive us all the way to Ko Lanta, 3 hours away.

Our easy one and a half hour journey to a nearby island turned into a 5 hour disorganised muddle. After another short ferry crossing we were finally dropped off near our hotel, Riviera Boutique House, at 9pm in the pitch black. The area was dead and I’d been trying to email the hotel whose check-in time ended at 8pm. Thankfully the owner had waited for us and showed us straight to our room, allowing us to sort formal check-in in the morning. We dropped our things and walked out onto the empty main street, nipping in to the first open restaurant we saw, Pinkys. We immediately ordered two big Chang beers and I had one of the best curries of my trip so far – a Thai massaman chicken curry bursting with flavour and full of veggies and cashew nuts. 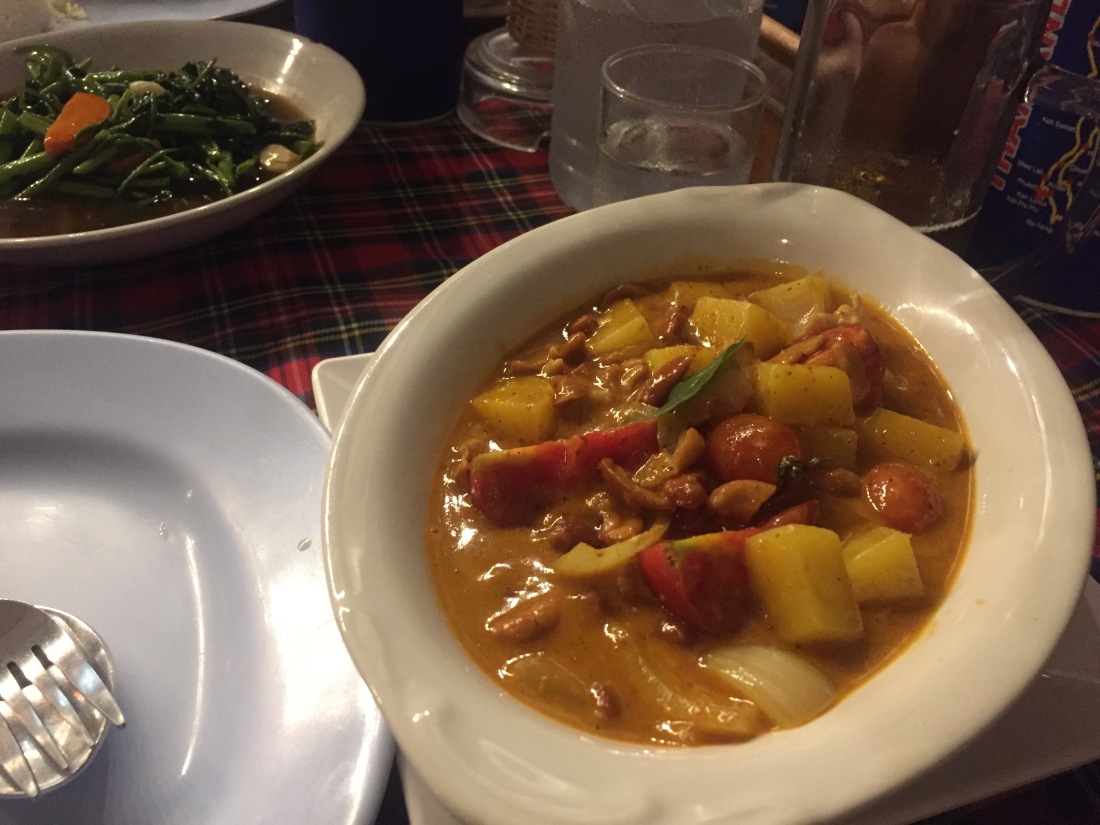 Walking back to the hotel we took a moment to look up at the stars which were shining brightly with the limited light pollution on the island. We gazed for a while then returned to our room after a long day of travelling/sitting around to finally watch The Beach and reminisce on our time on the Phi Phi islands.

The next morning we had breakfast at the café adjoined to our hotel then strolled down to the beach to see what it had to offer… which wasn’t a lot. The sand was course and it was covered in rubbish and broken coral so we returned to our hotel to make use of the pool at it’s sister resort next door. 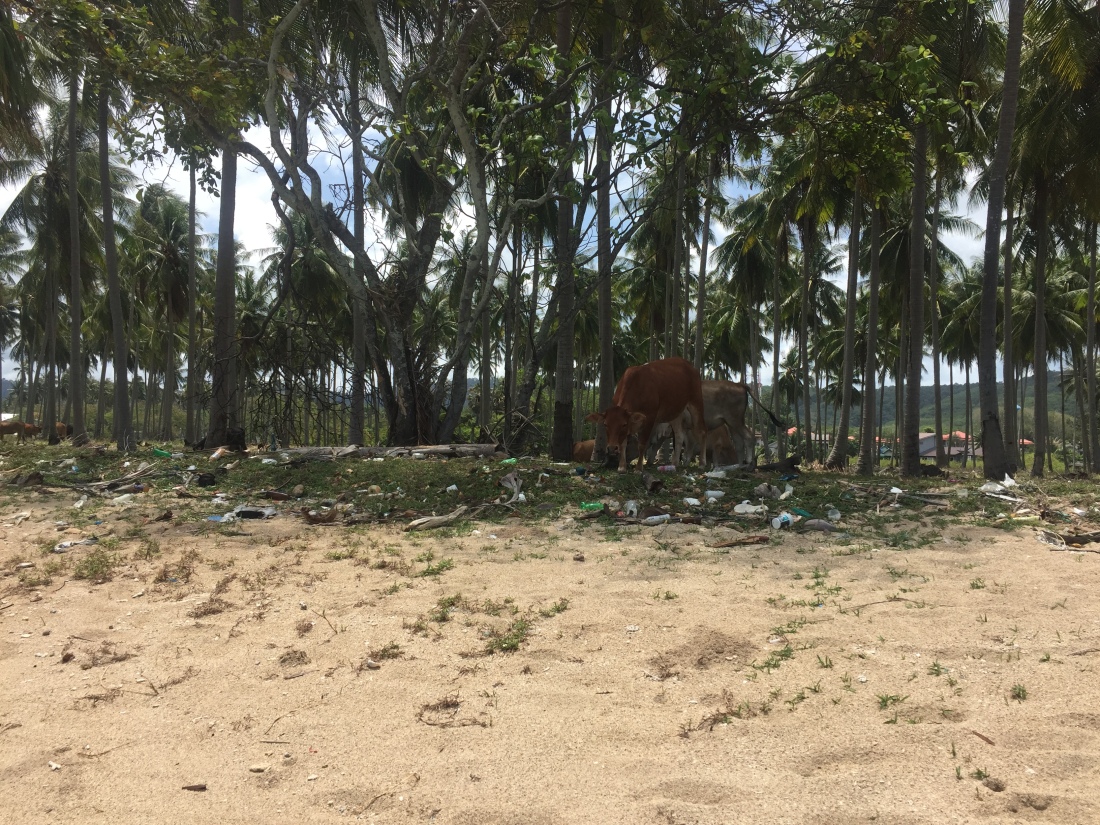 So far whilst away I’d not managed to get through the stack of books I’d wanted to read on my Kindle, so this provided the perfect chill day to do so. I finally opened up Harry Potter and the Cursed Child and read half of it in only a few hours, taking me straight back to my childhood and the excitement of getting your hands on the latest instalment.

In the evening we walked the length of the main road on the island and came across not much – a lot of the bars and restaurants had seemingly closed down for the end of the season, so we returned to Freedom Bar near our hotel and I had a Mai Tai whilst watching the sun set across the sea. For dinner we had limited choice as even Pinkys was closed this night. I ended up with a microwaved carbonara in which the sauce had separated and some rock solid garlic bread. Not the best. With not a lot else to do we returned to our room and pottered about.

Having travelled for 3 months now we’d managed to avoid renting a moped/scooter after seeing some horrendous injuries sported by travellers in hostels and had got by with using various public transport and cheap Grab taxis. Ko Lanta was so quiet that we didn’t have that option and the empty roads seemed the perfect place to finally give it a go, so we arranged with the lovely receptionist at our hotel for a bike and he brought one round moments later. When Tom asked how to use it however, the man backed up and refused to let use ride it, saying they couldn’t give out bikes to non-experienced riders. Do they not realise that pretty much every Brit in South East Asia has little-to-no experience with motorbikes? Oh well… instead we rented bicycles and set off for an explore.

We headed out along the main road and within moments it started spitting, which quickly erupted into a heavy downpour so we dipped into a mini-mart for shelter and the kind lady gave us chairs to sit down. In thanks we bought a couple of drinks and sipped those while we waited for the rain to stop. We cycled to another beach (nothing spectacular) and found yet more bars that were shut down for the season, then moved on to a viewpoint looking out across the sea.

Our landlord had given us an idea of a good route so we cycled towards a mangrove forest and got caught in the rain again. The jungle-lined roads were really pretty and it was a lovely way to explore the island, but the uphill journey back to our hotel was really difficult and at one point I had to get off and walk.

By the end of our day exploring my bum, legs and hands were killing and I felt I’d earnt my dinner. Pinkys was open again so we went there and I had beef and vegetable noodles and then, conscious we were leaving Thailand the next day, I wanted to tick off getting a Thai massage. There was a place just across the road, though it looked pretty empty, so we popped over and enquired about prices. Tom wasn’t interested in a Thai massage but was open to a foot and leg one so we managed to negotiate a good price for what we wanted.

I’d never experienced a Thai massage so wasn’t really too sure what to expect, other than to be pulled into some strange positions, and didn’t realise the whole thing would be done with my clothes on. I lay on what was essentially a double mattress and a tiny Thai lady mounted me and off we went! She moved my limbs around and bent me into some extremely unnatural positions, using her entire body weight to push down onto me until my joints clicked. She cracked all of my fingers and toes, my back and even my ribs. I honestly thought she was going to break my spine or dislocate my hips at several points and I queried the safety of it. Having said that, once I’d forgotten the pain I did feel I’d had a good stretch and left with a mixed feeling of limberness and having been beaten up. Tom on the other hand thoroughly enjoyed his leg massage, even if he did have to watch in horror as I almost had my back broken.

Whilst we’d been cycling round the island we’d noticed several signs advertising a ‘Half Moon’ party at Freedom Bar near our hotel, so having missed out on all the ‘Full Moon’ parties on the other Thai islands we figured we’d check it out. We followed the lights (Molotov cocktails) down to the bar and weren’t surprised to see it wasn’t that much busier than the previous night. We bought beers and watched the solitary fire dancer on the beach, then played a few games of pool and messed around with the free neon face paint. The bar grew busier and we couldn’t help but think those that had taken taxis to get there must have been disappointed if they were expecting a full blown party, but hey ho. We stayed for a while and got a bit drunk but knowing we had an early start to catch another ferry the next morning, we left at around 1. 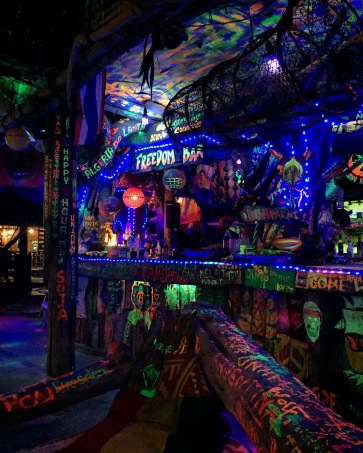 I’d expected Ko Lanta to be a paradise island with gorgeous white sandy beaches and calm seas but I think we just visited at the wrong time and perhaps the wrong area. It was a ghost town and that really affected our experience. Friends who had visited in busier times absolutely loved chilling in the beach bars and meeting people around the pool. Never mind though.