Langkawi is an island with a population of 65,000, located 30km off the mainland coast of north western Malaysia. We’d be taking a ferry from Ko Lanta in Thailand directly to Langkawi to begin the Malaysian stretch of our travels.

My alarm went off at 6.30am and we dragged ourselves out of bed and tried to check out of our hotel but nobody was at reception – annoying seeing as the owner owed me 100 baht. So we left our key in the door and waited for our minibus transfer which shockingly arrived bang on time – a novelty in SE Asia.

After several hours of driving we were dropped at a local bus station with some other backpackers and told to disembark. The driver didn’t speak English and simply pointed at another minibus so we attempted to ask if we’d be boarding that one and loosely translated some hand gestures as a yes. After a while of waiting we set off on the next leg of our journey and had an uncomfortable ride as the air conditioning didn’t work. We were dropped off outside a 7eleven and our driver spoke to a taxi driver who loaded our bags into the back of his truck.

It was now midday and the driver said we’d set off in 20 minutes so I popped into the shop and bought some water and a couple of ham and cheese toasties for our lunch. Whilst waiting in the queue the driver came into the shop and beckoned me to leave and I gestured I’d be 5 minutes. He huffed and puffed and left the shop. Now waiting for the toasties to be warmed, the driver re-appeared and I pointed to the grill and said I’d be 2 mins. That wasn’t good enough for him and he began shouting at the shop attendants who didn’t know what to do. He left again and I collected my barely warmed bread and walked out to the street to find the taxi driving off with my belongings, and Tom, leaving me at the side of the road. I raised my arms in a “WTF is going on?!” expression as Tom disappeared into the distance. I ran down the road and managed to jump in the back of the truck once it finally slowed down and I erupted into a barrage of curses aimed at the driver. Unbelievable.

Still furious, we were dropped off at the Satun ferry port at 2pm and handed over our passports for the ferry company to ‘book us in’ at an additional cost of 20 baht even though we’d already bought our tickets. After paying to use some horrendous flooded toilets we boarded the ferry and an hour and a half later arrived in Malaysia. We made it through passport control swiftly and withdrew Malaysian Ringit and bought a SIM card before heading out to see Langkawi’s huge golden eagle statue. 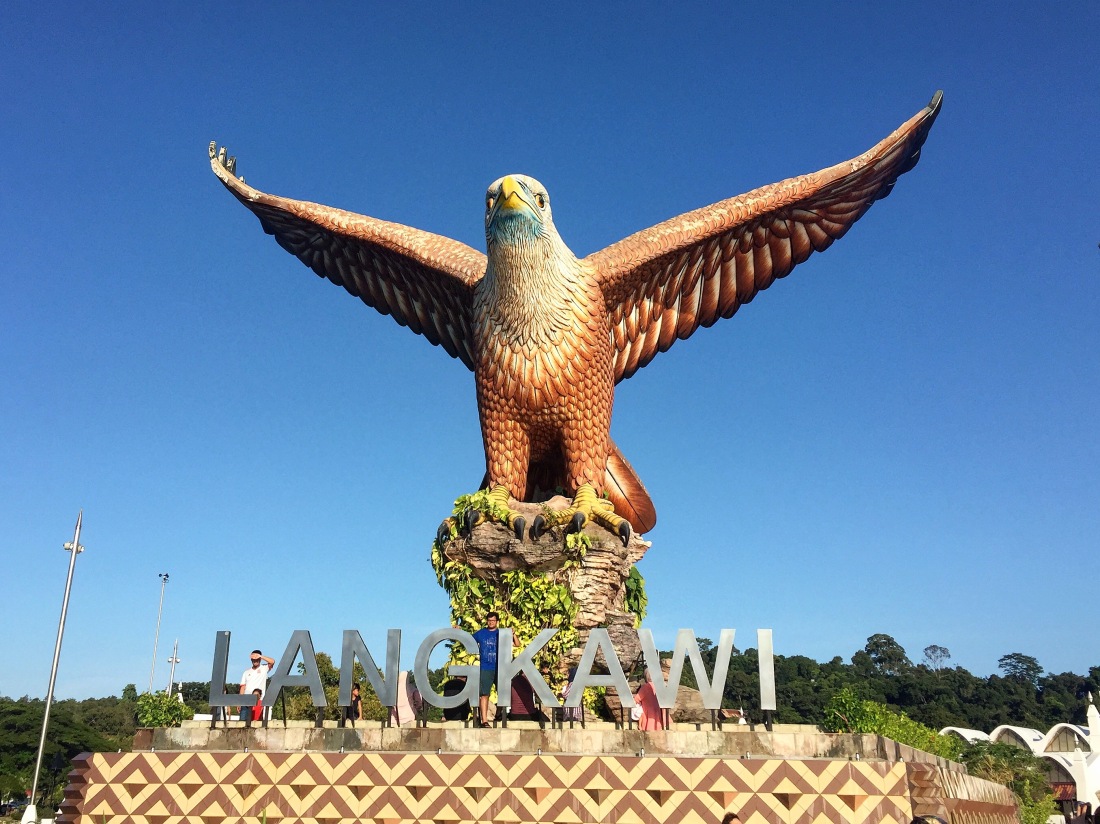 We took a Grab to our hostel, Box2packers, and were greeted by the most miserable lady I’ve had the pleasure of meeting who showed us to a tiny room with two metal bunk beds and a bathroom. So far we’d been quite selective with our hostels during our travels and this was actually the first dorm room we’d booked that didn’t have privacy curtains on the beds (budget-friendly accommodation choices were limited in Langkawi). There was barely enough room to move and even less so when our roommate arrived. He was a tattoo artist working in town and had been living there for a few weeks. He told us a little about the area and advised us to leave the door unlocked when we went to bed so he wouldn’t disturb us when he came home from work at 4am. I know he was being thoughtful but that just wasn’t the news I needed.

Hating the room and now in an even worse mood after 10 hours of travelling, I said I wanted to move to a different hotel. Tom told me to shut up and I ranted as we walked 15 minutes to the beach to have a beer at a little bar with small candle-lit tables on the sand whilst watching the sunset. The beach was huge and people were jet-skiing and parasailing on the water with a gorgeous orange sky blazing behind them. I calmed down a little.

For dinner we browsed a range of restaurants, turning most of them down as they were either seafood restaurants (Tom’s allergic) or too expensive for us. We ended up having chicken shawarma wraps from a street stall and shared some fries. We treated ourselves to ice cream cones on the way back to the hostel and I attempted to sleep in our hot little room.

I was kept awake most of the night by the middle aged Asian man sleeping on the bed below me who snored so loudly and tossed and turned constantly, rocking me around on the top bunk. I was of course wide awake when the tattoo artist returned at 4am. My alarm went off in the morning and I’d already found a hotel with availability down the road we could move to so packed my bag and told Tom to do the same. He was confused but not wanting to get into a discussion I made it clear it was an instruction, not a request.

The grumpy receptionist was in an equally joyful mood as we checked out and I set off up the road at a pace with Tom in tow. Arriving at Desa Terrace I got a double room for £11.50 and we were allowed to check straight in. It was extremely basic and the bedding was pretty stained and there were mouse droppings in the bathroom but it was better than before. Sometimes you just need your own space.

Feeling much better, we walked into town and got a Subway for breakfast, saving half for our lunch later on. One of the main tourist attractions in Langkawi is its spectacular SkyBridge soaring high above the mountains so we took a taxi to the cable car station at its base. Tom was still having tummy troubles after his street food experience in Thailand so I played on a seesaw in a children’s play area whilst he ‘had a business meeting’.

Tickets for the cable car were £12 each – a bit pricey for us – so we hoped it would be worth the expense. Tom was instantly sketched out by the cable car and, channelling my father’s silly excitement at such events, I continued to draw his attention to the distance between us and the mountains below. He was less than entertained – sorry Tom! The views nevertheless were incredible; dense jungle in all directions, leading down to white sand beaches meeting the aquamarine sea. It was quite similar to the cable car we took in Hong Kong but this was a little more special. At the very top we were treated to more amazing views for miles around. 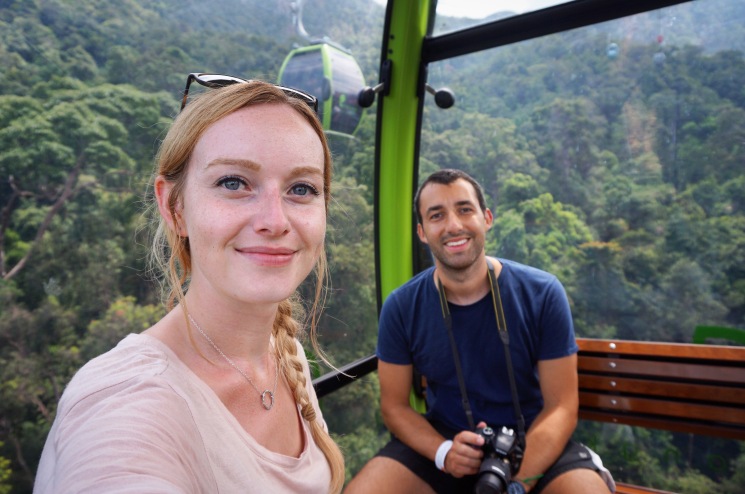 A short walk down some steps through the jungle led us onto the SkyBridge, the longest free span and curved bridge in the world. I must admit, I’m not too fussed by heights normally but stepping out onto the metal panels did make my knees wobble a bit when I realised there was nothing else between me and the jungle floor below, though not quite as much as the gentleman next to me whose entire body was shaking as he clung onto the handrail. I jumped up and down on a glass viewing panel to annoy Tom and after we’d snapped all the photos we wanted and taken in all the views, we took the cable car back down and returned to our hotel. 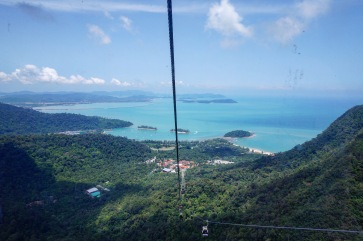 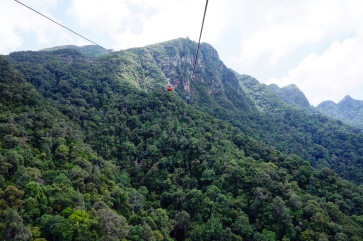 Not wanting to waste the rest of the day, we gathered some things and headed down to the beach. We lazed on the sand and had a quick dip in the sea then watched the sunset once more. We threw clothes on over our soggy beachwear and went to Yasmin, a Turkish restaurant in town, where I had another chicken shawarma and Tom had a vegetable moussaka. That evening I attempted to plan our time in Bali following a recent string of earthquakes on the nearby island of Lombok.

The following morning we had breakfast at the hotel and set off again for the beach. We paid £5 to hire two sun loungers and a parasol for the day and I began my Girl in the Spider’s Web book which I’d been meaning to read for a year. The beach was huge so we had plenty of space and the sand was so soft and fine it literally fell off your skin. Being in a majority Muslim country there was probably a 50/50 split of women in bikinis and women in burqas so it was quite entertaining to watch burqa-clad women splashing around in the sea – it’s a wonder they didn’t drown their clothing must’ve been so heavy. 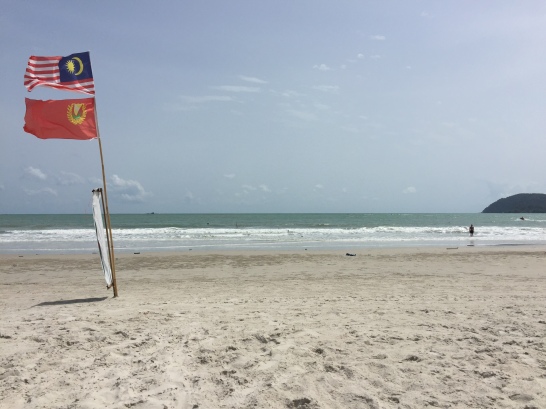 In the afternoon I went in search of beer but, again, being a Muslim country it was hard to come by. I ended up on a mission and walked barefoot down the main high street determined to find some, asking at local shops until I succeeded. We sipped our beers on the beach then enjoyed falafel and more chicken shawarmas at Yasmin’s smaller fast food restaurant in the evening and continued to plan our travels back at the hotel.

Deciding we’d both lost a bit of weight, we remembered we’d taken a series of ‘before’ photos when we’d joined the gym in London back in January so dug them out. We took new photos of each other to compare and we were both gobsmacked… we’d lost so much weight and couldn’t believe how chunky we were previously. My back, waist, legs and face were so much slimmer now – surprising bearing in mind we’d been drinking beer most days! Hopefully the weight will stay off!