A 5am start to get a taxi to the bus station outside Hanoi was only made worse when we located our bus to Hue and it was comparable to Indian standards. We realised we might have made a mistake with our booking when we were the only westerners aboard. Making our way to the back of the bus we selected two of the few remaining top bunk seats, one of which was right against the toilet (which was thankfully barricaded closed) and had a big pillar next to the chair reducing the already limited space. Tom took one for the team and braved that seat. I’m not really sure you could even call them seats to be honest – they comprised of a flat padded board with a raised box at one end, supposedly to be used as a backrest/pillow. The pillow and blanket provided would’ve been useful if they looked like they’d been washed in the last year. I just kept telling myself, “it’s only 12 hours” as if that was some sort of comfort.

Thankfully we both managed to sleep for the first 4 hours but as the heat of the day got worse the air conditioning didn’t hold up and we were melting. Stopping for a lunch break at a Vietnamese roadside café it was evident that food was included in our ticket, but looking at the pictures on the menu and seeing snakes, eels, turtles and crocodiles we instead opted for a pack of crisps and some oreos. Another few hours passed by and the day got even better as we watched each passenger disembark at one ‘toilet stop’ and squat down next to the bus with absolutely zero f**ks given. 12 hours in and we weren’t yet near Hue but still chose not to eat at the dinner stop. 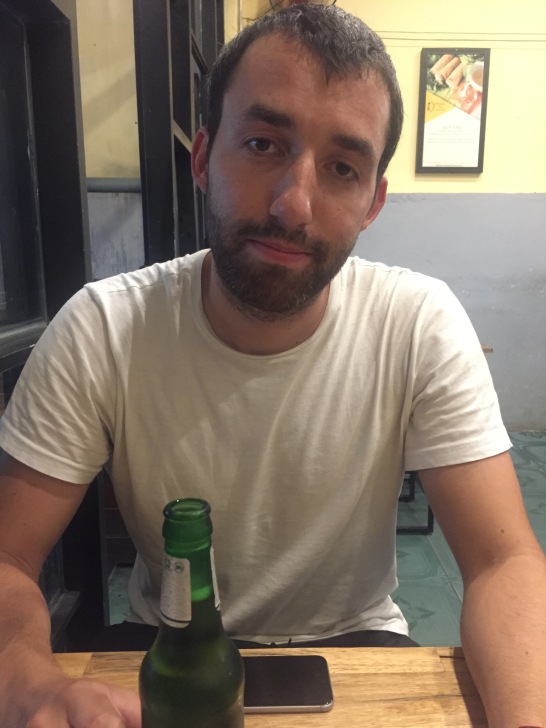 The journey ended up totalling 14 hours and we were completely exhausted by the time we got to our destination. For anyone travelling in Vietnam, do not use Hoang Long bus company! A short taxi ride to our hotel, Poetic Hue Hostel, and we dropped off our bags at reception and went straight for food at Madam Thu Restaurant which the receptionist recommended across the road. Whilst waiting for our meal, Tom spotted the Kiwi couple we’d met on our Halong Bay tour walking down the road so I ran out to say hi and they came and joined us. So strange to bump into people you know when travelling between such weird and wonderful places. We caught up for a while and heard about what they’d been getting up to, taking notes for ourselves.

We were overjoyed to finally get into our room and find it was modern, clean and had a huge comfy bed. The next morning after a cracking sleep we had breakfast on the roof of our hotel (banana pancakes) and set off to visit the Imperial Citadel, formerly the imperial capital of Vietnam. The huge walled city housed numerous decorative temples, pagodas, gardens and colourful archways. I’d been a tad silly and hadn’t applied the factor 50 straight away… cue a killer vest and shorts burn. 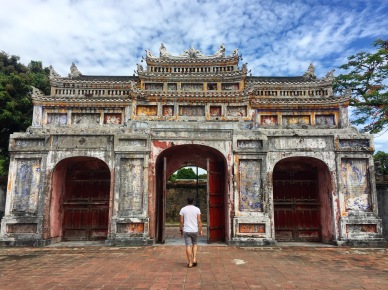 In the evening we walked through the night markets and Tom dragged me to a family run restaurant quite a long way away and I had a paddy as I was hot and sweaty and they didn’t have aircon. Once I’d grown up I enjoyed a really nice, if slightly odd, meal of crispy chicken with passionfruit sauce. A couple of beers in a bar and then we returned to the hotel to Face Time my parents and packed our things to leave Hue the next morning.

Next stop… Hoi An.